Opening Hours
WE ARE OPEN:


FIND OUT WHAT'S
COMING UP AT
THE MUSEUM

All the artefacts at the West Kirby Museum come from St Bridget's Church or associated local sites, and help to tell the story of its development. Fragments of stones found in the grounds have helped to date the five different periods of building.

Stone Artefacts from the Middle Ages

Only a small amount of archaeology represents the 1st Church, which was built around AD 900. Sections of two crosses date from the 10th century, at a time when the building was probably made of wood. The most notable find from this period is the hogback stone, about which there is more information below. 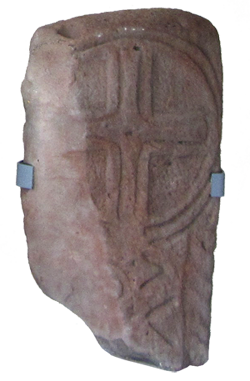 The majority of the collection comprises masonry and grave markers from around the time of the Norman Conquest, and it was in 1150 AD that the 2nd Church was constructed, being the first stone building on the site. At the museum you can see numerous column and wall fragments from this era which hint at the type of church built by the Normans.

Two of the most interesting stone-carved items in the collection are a child's coffin dating from the 12th century, and a footbath, most likely because the church was a site of pilgrimage.

The 3rd Church was formed by a period of rebuilding dating from the 1230s. A column base is on display, probably from this period of alteration. There are still elements of architecture in-situ from this construction phase, including a half-pillar at the west end of the arcade.

Three 13th century grave slabs are present in the museum collection which show elaborate sandstone designs hinting at the nature of those buried.

In the church, the surviving east window and the chancel priest's door date from around the 1330s and the museum contains a corbel head from this time.

At the turn of the 15th century the church tower was erected, which has survived through the reincarnations of the 4th church in 1789 and 5th church in 1869.

The oldest artefact in our collection is also the best known in the area, but unfortunately not held within the museum building itself. If the church is open when you visit, you will be able to see an Anglo-Norse ‘hogback’ stone dating to the 10th century AD which was discovered during the restoration of the church in 1869.

This is a high status form of monument. Hogback stones are sculptured stones with a distinctive curved ridge and bowed sides. This shape, and the carved ‘roof shingles’ on either side of the central ridge, are reminiscent of Scandinavian-type houses of the Viking age. They are stylised ‘houses’ for the dead.

The St. Bridget’s stone is carved from hard, grey sandstone which may have come from the Ruabon or Cefn area of North Wales. This type of monument is rare in the region. They are found in greater numbers in Yorkshire and Cumbria.

The non-local type stone underlines the exotic and elite nature of this particular memorial. The design styles show close links with other northern and western examples. Its coastal position probably reflects involvement in coastal trade during the Viking period.

In addition to the artefacts on display to the public, you can click here to see our Reserve Collection which is held in storage awaiting further research.